Furbearing animals are a natural resource, and they help create jobs and income for many families in Tennessee.  These are some of the most common furbearers in the state of Tennessee:

Coyotes are very abundant throughout the state of TN.  They are easily identified with their long nose and large ears.  They have become a nuisance to many property owners in the State as well as to some city residents where coyotes prey on pets such as cats or small dogs.  Coyotes are the top predator in the State (not counting wolf hybrids in the eastern part of the state) and usually Trappers and Hunters are the only ones to help keep the population in somewhat of a balance with nature.

This sly little canine is a little more shy than the coyote to where he isn't viewed as much in his habitat as the coyote.  Gray Fox live more in thicker vegitated areas such as old cutovers, overgrown fields, and thickly covered young wood lots.  Gray Fox are very common throughout the State and once they reach maturity do not have many predators other than coyotes.

The Red Fox is not near as abundant as it once was in Tennessee.  This is mostly due to the over abundance of coyotes.  Coyotes prey on Red Fox and their pups to weed out "competition" as they live and hunt basically the same terrain.  Although Red Foxes are known to live in "the woods" and "fields" they regularly make their home in the suburbs and are frequently seen in towns and cities. 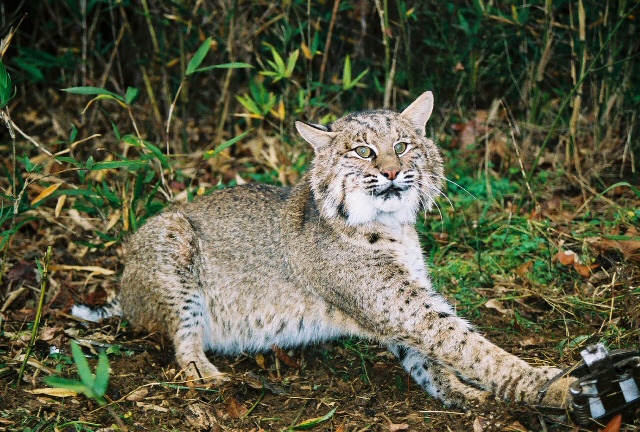 Bobcats are also common throughout the State, more common is some areas than others, all depending on habitat.  Where prey and cover are sufficient Bobcats thrive in Tennessee. Bobcats like different types of habitat such as, swampy lowlands, thick vegitated farms, overgrown field edges, rocky ridges with sufficient water sources, and yes, even suburban areas as well.  Bobcats may travel through your backyard the same as coyotes or foxes and you may never even know it.

Raccoon: Raccoons are probably the most abundant of Tennessee Furbearers not counting the Oppossum of course.  Raccoons thrive everywhere and anywhere in the State, from cities to swamps, towns to rocky ridges.  Mostly Raccoons are known for living around river drainages, but they can get by quite well with little water nearby. Raccoons are largely considered a nuisance animal in Cities where they tear into garbage and living in residential homes creating problems for homeowners.  Even though they are cute and seem harmless, be careful when approaching as they can and do carry rabies and distemper.

Beaver:  Beaver are also abundant throughout the State and are also becoming quite a nuisance to farmers and landowners where they dam up creeks and drainage ditches causing thousands of dollars in damages. Beaver do create good habitat for other wildlife, as long as they are some what kept in check, and help waterfowl and other animals with suitable habitat to multiply as well.  This once highly sought after animal helped create this great country, by Mountain Men opening up the western lands seeking them for their hides, creating jobs world wide by the fashion of hats made from their pelt.

Otter:  Otter were not so common in Tennesse until the re-introduction of them by the Tennessee Wildlife Resources Agency and of course Trappers.  Yes thats right, Trappers caught otter in foothold traps so they could be introduced into areas of the State where they were not abundant or the area lacked them all together.  Today Otter cover most of Tennessee in great numbers as well as through out most of the South.  They flourish in all types of water sources from drainage ditches to large lakes and rivers.  Otter can be devastating on fish numbers in farm ponds, trout creeks, and catfish farms to the point that Trappers can easily get access to trap waterways to help control otter populations.

Mink:  This little member of the Weasel family still thrives in Tennessee although rarely seen in most areas.  Mink live mostly along smaller creeks and rivers, but can be found along lakes as well as drainage ditches.  The population isn't what it was back 30 years or so ago according to Trappers from years back, but still can be caught in numbers with a lot of work.

Muskrat:  This little rodent, like the Mink, isn't as abundant in a lot of the State as it once was.  No one really knows why, some say it is due to Otter populations, large numbers of Birds of Prey,  and other small factors.  There are parts of the State, like the North West, that still have a large population of Muskrats.

Merry Christmas
by james lord over a year ago

Holidays!
by bronco2 over a year ago

Trapping pics
by bronco2 over a year ago

Anyone sale any fur?
by bronco2 over a year ago
More...